Fill Your Home with the Colors of India

Carpet weaving and folklore tie the people of the East together just like dreaming ties all mankind. All these people have knotted beautiful carpets for many centuries and even shared knowledge with their neighbors. At first, carpet weaving skills were elaborated in West-Asia for practical and symbolic purposes. Later, they spread all over the places where eastern cultures had something special and distinct to add to this craft. An important mixture of cultures happened in India in the 16th century when Emperor Akbar from the Mogul dynasty introduced Persian rugs.

Compared to nomadic tribes, who needed to cover the walls or the floor of tents in order to stay warm, the blazing hot climate of India required no protection from cold. This was one of the main reasons why carpet weaving was unknown to Indians. On the other hand, their culture was so vibrant and rich in colors, traditions and beliefs that were perfect for being used in applied arts. During the reign of Emperor, Akbar arts flourished in India. He brought Persian weavers in the cities of Agra and Lahore with the hope that they would add a touch of luxury to the Indian lifestyle.

The Persian artisans and the others that learned from them the art of carpet weaving, made rugs that were used only for the needs of the court, royal palaces and not for the daily needs of common people. Hence, carpets were used only for decoration and it was a good start because high-quality materials and valuable stones and gems were the basic raw materials for those carpets.

But, these facts are not the only ones that made rugs weaved in India different to others manufactured in Asian countries. There is another important detail about them, which can explain why they were original and not simple imitations of Persian designs and motifs. The first persons that learned the craft of carpet weaving from the Persian artisans were prisoners. Although it sounds unusual, jails were the places where the production of Indian rugs flourished. In prisons, there was no need for money and prisoners lacked freedom, but they didn’t lack time, imagination and willingness to learn.

Prisoners surpassed their masters and they managed to add original features of Indian culture to their carpets. They used the finest silk, wool, kashmir and vegetable dyes obtained from plants and insects. Weavers used natural dyes to make colors like midnight blue, emerald green, light pink, red, mustard yellow, blue, brown, black and other varieties of colors. Colorful design and rich patterns combined with old Persian motifs resulted in quite unique carpets. The Mogul period was famous for its floral carpets, which reflected the passion of royal personalities for botany.

Currently, all the carpets from the early period of carpet weaving in India are stored in museums in India and all over the world and in private collections. Based on the fact that Mogul rugs were strongly linked to the dynasty of Emperor Akbar they started to fade together.

The 19th century brought chemical dyes and increased demand from western countries, so weavers in India started to make carpets according to the needs of foreign purchasers. They focused mostly on Persian designs and motifs. However, many of them continued to follow the carpet weaving traditions of the Mogul period. 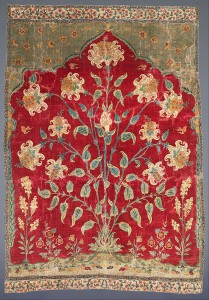 See the full image from the Musuem of Islamic Art, Qatar

You can bring a slice of India into your home through one of these masterpieces of craftsmanship.
Trying to include all the workmanship of weavers in one single oriental carpet is similar to depicting an ocean as a drop. The combination of Persian craftsmanship with the Indian culture resulted in the production of carpets that included elements from all the major eastern cultures. Just like the tale of the single drop of water in the ocean that turned into a pearl, Indian rugs of the Mogul period turned into artifacts of the country’s history.